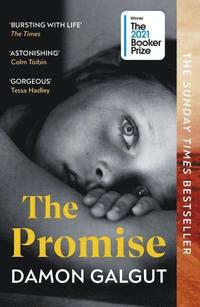 WINNER OF THE BOOKER PRIZE 2021

av Damon Galgut
Häftad Engelska, 2022-03-03
119
Köp
Spara som favorit
Finns även som
Visa alla 1 format & utgåvor
WINNER OF THE BOOKER PRIZE 2021 One family. One promise. One chance to tell a new story. 'A moving, brilliantly told family epic' Elizabeth Day THE SUNDAY TIMES BESTSELLER On a farm outside Pretoria, the Swarts are gathering for Ma's funeral. The younger generation, Anton and Amor, detest everything the family stand for - not least their treatment of the Black woman who has worked for them her whole life. Salome was to be given her own house, her own land...yet somehow, that vow is carefully ignored. As each decade passes, and the family assemble again, one question hovers over them. Can you ever escape the repercussions of a broken promise? 'A tour de force... A spectacular demonstration of how the novel can make us see and think afresh' Booker Judges, 2021 'Astonishing' Colm Toibin 'Utterly compelling' Patrick Gale
Visa hela texten

A superb novel; a nuanced, sad, hilarious portrait of a family and a country -- PAULA HAWKINS This story was so powerful, the writing so strong and supple... What an achievement -- CLARE CHAMBERS A moving, brilliantly told family epic . . . darkly comic . . . phenomenally good -- ELIZABETH DAY Layered, clever...with a gripping story -- CLAIRE FULLER * Daily Mail, Books of the Year * A brilliant book told over four decades and four funerals . . . These are characters dancing on the edge of ruin . . . Intoxicating -- ANNA HOPE Astonishing . . . about fate and loss, about three siblings and land, a promise made a broken -- COLM TOIBIN A remarkable tale of four generations of one South African family and of the country itself... No wonder it won the Booker * Observer, Books of the Year * Vivid and suggestive, moving and often very funny * Daily Telegraph, Books of the Year * Outstanding . . . Gripping . . . There is also plenty of unexpected comedy * BBC News * Brilliant... Rarely have I had such a strong sense, while reading a novel, that I myself was there, in the room with the characters * Financial Times *

DAMON GALGUT is the author of nine novels. He won the Booker Prize 2021 for The Promise, having been shortlisted for the prize twice before (The Good Doctor and In A Strange Room). He lives and works in Cape Town.