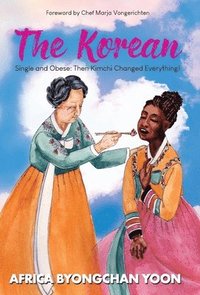 Single and Obese: Then Kimchi Changed Everything!

av Africa Yoon
Inbunden Engelska, 2021-11-17
309
Köp
Spara som favorit
Kan levereras innan julafton!
Finns även som
Visa alla 1 format & utgåvor
Africa Yoon ne Engo was about to turn 30. She was a celebrated activist working in Manhattan and around the world when she found she had gained 120 pounds and was obese. She realized she needed a life beyond her work and dreamed about having a husband and children. For her dream to come to fruition, she must work on herself to achieve her goal.

The activist starts on the road toward the greatest cause of her career-to save herself-and decides she will do a spiritual and physical makeover to find self-love in hopes it may lead to true love. One afternoon at the Asian grocery store Hmart, a Korean grandmother calls her fat! After the initial embarrassment of the public moment, the two begin an unusual friendship that leads her to eating kimchi-and that moment changes everything.

This memoir is full of culture, food, inspiration, and travel in this ugly-duckling-turned-swan transformation story, not unlike the self-discovery and romance vein of Sex and the City.
Visa hela texten

Africa Yoon is an author, television host, and celebrated activist known for working with young people on education, poverty eradication, racism, at-risk youth, obesity, bullying, sexual health, and sport. She was awarded the Golden Graal humanitarian prize in Rome for using film and television to educate about HIV/AIDS and named one of the Top 40 Youth Activists globally by MTV and the Kaiser Family Foundation in her late teens. She has spoken worldwide, including at the United Nations, and is recognized for ending her speeches in song and dance. A graduate of New York University/Tisch School of the Arts, Mrs. Yoon bridges culture, activism, and entertainment in all her projects.Born into a family of diplomats, including an Olympian-turned-United Nations-ambassador-father and activist mother, she is currently the CEO of Blackyoonicorn, a mommy and me cultural company that sells language and cultural toys for children and affordable luxury global home goods for their mothers. With a passion for Korean food and health, she runs the popular "Korean Cooking Friends" Facebook Group and cooking app by the same name. Mrs. Yoon lives in Oahu, Hawaii, with her husband and children and splits her time in Busan, South Korea.