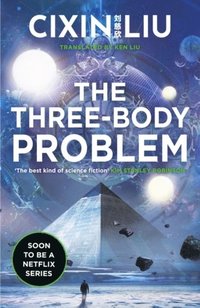 av Cixin Liu
(9 röster)  |  Läs 2 recensioner
Häftad Engelska, 2015-12-03
119
Köp
Spara som favorit
Finns i lager! Skickas inom 1-2 vardagar.
Fri frakt inom Sverige över 159 kr för privatpersoner.
Finns även som
Visa alla 8 format & utgåvor
Read the award-winning, critically acclaimed, multi-million-copy-selling science-fiction phenomenon - soon to be a Netflix Original Series from the creators of Game of Thrones. 1967: Ye Wenjie witnesses Red Guards beat her father to death during China's Cultural Revolution. This singular event will shape not only the rest of her life but also the future of mankind. Four decades later, Beijing police ask nanotech engineer Wang Miao to infiltrate a secretive cabal of scientists after a spate of inexplicable suicides. Wang's investigation will lead him to a mysterious online game and immerse him in a virtual world ruled by the intractable and unpredictable interaction of its three suns. This is the Three-Body Problem and it is the key to everything: the key to the scientists' deaths, the key to a conspiracy that spans light-years and the key to the extinction-level threat humanity now faces. Praise for The Three-Body Problem: 'Your next favourite sci-fi novel' Wired 'Immense' Barack Obama 'Unique' George R.R. Martin 'SF in the grand style' Guardian 'Mind-altering and immersive' Daily Mail 'A milestone in Chinese science-fiction' New York Times 'China's answer to Arthur C. Clarke' New Yorker Winner of the Hugo and Galaxy Awards for Best Novel
Visa hela texten

'For a book that makes you think, and holds true to some of the traditional values of SF, this one can't be beat' * SFF World Magazine. * 'The writing is superb ... The ideas are astounding, real eye-openers that expand the mind and really get the old grey matter going ... A stand-out, award-worthy novel and one that deserves a place amongst the science fiction classics' * SF Book Reviews. * 'Hard science fiction at its finest, and fans will appreciate the superb attention to detail that drives this constantly evolving and impressive series' * SciFiNow Magazine * 'China has a lively SF scene inaccessible to western audiences until recently, so it's a great pleasure to read this book by Cixin Liu - the country's most popular SF writer - in English. Handled expertly on the terms of the genre, it is seeing this tale played out through a different cultural lens that makes the book fascinating. The translation is exemplary. The book is top-flight SF; smart, informative and engaging' * SFX * 'It's a stunning, high-concept, rollercoaster of a novel which offers an intriguing Eastern perspective ... this is a trilogy which, like Asimov's Foundation epic, looks set to quickly become an essential science fiction classic' * Starburst Magazine (rating: 9/10) * 'Liu Cixin's impressive The Three Body Problem won the 2015 Hugo award for best novel, the first time a Chinese writer has taken that prize' * Guardian (2015 Books of the Year) * 'The best kind of science fiction' -- Kim Stanley Robinson 'A milestone in Chinese science fiction' * New York Times * 'A marvellous melange of awe-inspiring scientific concepts, clever plotting and quirky yet plausible characters, all conveyed in in a plain style capable of signalling hidden depths' * The Times * 'b>'Wildly imaginative, really interesting ... The scope of it was immense' -- Barack Obama, 44th President of the United States