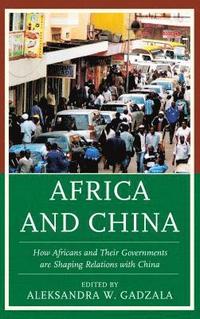 How Africans and Their Governments are Shaping Relations with China

av Aleksandra W Gadzala
Häftad Engelska, 2017-12-15
509
Köp
Spara som favorit
Skickas inom 10-15 vardagar.
Fri frakt inom Sverige för privatpersoner.
Finns även som
Visa alla 2 format & utgåvor
The China-Africa relationship has so far largely been depicted as one in which the Chinese state and Chinese entrepreneurs control the agenda, with Africans and their governments as passive actors exercising little or no agency. This volume examines the African side of the relation, to show how African state and non-state actors increasingly influence the China-Africa partnership and, in so doing, begin to shape their economic and political futures. The influx of public and private sector Chinese actors across the African continent has led to a rise of opportunities and challenges, which the volume sets out to examine. With case studies from Nigeria, Angola, Kenya, South Africa, Ethiopia, and Zambia, and across the technology, natural resource, manufacturing, and financial sectors, it shows not only how African realities shape Chinese actions, but also how African governments and entrepreneurs are learning to leverage their competitive advantages and to negotiate the growing Chinese presence across the continent.
Visa hela texten

After engaging with the chapters of Africa and China...the reader will be hard pressed to maintain the stereotyped image of Chinese agency and African passivity. There is almost a sense of empathy evoked toward the Chinese side engaging in such complex and often difficult terrain. The book clearly sets out what it intends to achieve - namely that the role of Chinese actors on the continent needs to be grasped analytically within the varying regional and national contexts in which they operate. The strong empirical evidence provided for this argument demonstrates that this is not merely an exercise in polemical inversion - but rather an intractable reality that should be heeded by investors, policy-makers and academics alike. * South African Journal of International Affairs * This is a wonderful collection of work by accomplished scholars in the China-Africa field who properly put the focus on Africa. The book makes the case for African agency as the continent increases its interaction with China. -- David Shinn, co-author of China and Africa: A Century of Engagement Africa and China makes an important analytical contribution to a set of consequential issues that remain poorly understood. Gadzala and the chapter authors make a convincing case that Africans are no mere passive observers to China's growing activities on the continent, but rather they are active shapers of the trends-and ultimately responsible for the economic and political effects. -- Todd Moss, Center for Global Development and author, African Development: Making Sense of The Issues and Actors This is a significant contribution to the study of China-Africa relations by some of the most noted experts in the field, cutting through many cliches and providing a genuinely nuanced understanding of actor agendas, especially on the African side. Invaluable reading for anyone interested in this key dynamic in the domestic politics and external relations of Africa as it enters its second decade. -- Ricardo Soares de Oliveira, University of Oxford Aleksandra Gadzala's new edited volume puts African agency at the center of its analysis of the China-Africa engagement. These chapters have intellectual heft, careful scholarship, and vivid writing. A collection to read carefully, learn from, and savor. -- Deborah Brautigam,, Bernard L. Schwartz Professor of International Political Economy, Director of the SAIS China Africa Research Initiative, Johns Hopkins School of Advanced International Studies (SAIS)

Editor: Aleksandra W. Gadzala is a geopolitical risk and social impact consultant focused on emerging and frontier markets. She holds a PhD in Politics from the University of Oxford. Contributors: Lucy Corkin works at Rand Merchant Bank, a South African investment bank, and is a Research Associate of the Africa-Asia Centre, School of Oriental and African Studies, University of London. Joshua Eisenman is assistant professor at the University of Texas at Austin's Lyndon Baines Johnson School of Public Affairs and senior fellow for China studies at the American Foreign Policy Council (AFPC) in Washington, DC. Iginio Gagliardone is British Academy Research Fellow and a member of the Programme in Comparative Media Law and Policy at the University of Oxford. Calestous Juma is Professor of the Practice of International Development and Director of the Science, Technology, and Globalization Project at Harvard Kennedy School. Mark Kaigwa is a consultant, technologist and blogger based in Nairobi, Kenya and a recognized leader in Africa's emerging media industry. Giles Mohan is Professor of International Development at the UK's Open University. Barry Sautman is a political scientist and lawyer at Hong Kong University of Science & Technology. Ian Taylor is Professor in International Relations and African Politics at St Andrews and also Chair Professor in the School of International Studies, Renmin University of China. Yu-Shan Wu is a full-time researcher at the South African Institute of International Affairs, University of the Witwatersrand, Johannesburg.