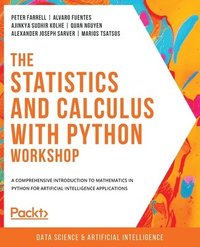 The Statistics and Calculus with Python Workshop

A comprehensive introduction to mathematics in Python for artificial intelligence applications

av Peter Farrell, Alvaro Fuentes, Ajinkya Sudhir Kolhe, Quan Nguyen, Alexander Joseph Sarver
Häftad Engelska, 2020-08-18
371
Köp
Spara som favorit
Skickas inom 10-15 vardagar.
Gratis frakt inom Sverige över 159 kr för privatpersoner.
Finns även som
Visa alla 1 format & utgåvor
With examples and activities that help you achieve real results, applying calculus and statistical methods relevant to advanced data science has never been so easy Key Features * Discover how most programmers use the main Python libraries when performing statistics with Python * Use descriptive statistics and visualizations to answer business and scientific questions * Solve complicated calculus problems, such as arc length and solids of revolution using derivatives and integrals Book Description Are you looking to start developing artificial intelligence applications? Do you need a refresher on key mathematical concepts? Full of engaging practical exercises, The Statistics and Calculus with Python Workshop will show you how to apply your understanding of advanced mathematics in the context of Python. The book begins by giving you a high-level overview of the libraries you'll use while performing statistics with Python. As you progress, you'll perform various mathematical tasks using the Python programming language, such as solving algebraic functions with Python starting with basic functions, and then working through transformations and solving equations. Later chapters in the book will cover statistics and calculus concepts and how to use them to solve problems and gain useful insights. Finally, you'll study differential equations with an emphasis on numerical methods and learn about algorithms that directly calculate values of functions. By the end of this book, you'll have learned how to apply essential statistics and calculus concepts to develop robust Python applications that solve business challenges. What you will learn * Get to grips with the fundamental mathematical functions in Python * Perform calculations on tabular datasets using pandas * Understand the differences between polynomials, rational functions, exponential functions, and trigonometric functions * Use algebra techniques for solving systems of equations * Solve real-world problems with probability * Solve optimization problems with derivatives and integrals Who This Book Is For If you are a Python programmer who wants to develop intelligent solutions that solve challenging business problems, then this book is for you. To better grasp the concepts explained in this book, you must have a thorough understanding of advanced mathematical concepts, such as Markov chains, Euler's formula, and Runge-Kutta methods as the book only explains how these techniques and concepts can be implemented in Python.
Visa hela texten

Peter Farrell learned to program from the Logo code in Seymour Papert's Mindstorms. A student introduced him to Python and he never looked back. In 2015, he self-published Hacking Math Class with Python on applying Python programming to learning and teaching high-school math. In 2019, No Starch Press published his second book, Math Adventures with Python. In his books, he also presents 21st-century topics, such as Cellular Automata, 3D Graphics, and Genetic Algorithms. Currently, he teaches Python and Math in the Dallas, Texas area. Alvaro Fuentes is a senior data scientist with a background in applied mathematics and economics. He has more than 14 years of experience in various analytical roles and is an analytics consultant at one of the 'Big Three' global management consulting firms, leading advanced analytics projects in different industries like banking, technology, and consumer goods. Alvaro is also an author and trainer in analytics and data science and has published courses and books, such as 'Become a Python Data Analyst' and 'Hands-On Predictive Analytics with Python'. He has also taught data science and related topics to thousands of students both on-site and online through different platforms such as Springboard, Simplilearn, Udemy, and BSG Institute, among others. Ajinkya Sudhir Kolhe is a programmer working for a tech company in the Bay area. He holds a M.S. in Computer Science and has experience in the tech industry of 5+ years. His area of interests include problem solving, analytics and applications in Python. Quan Nguyen is a programmer with a special interest in scientific computing, data analysis, and artificial intelligence. Before publishing his first book with Packt, he was a primary contributor to the book Python for Scientists and Engineers and various open source projects on GitHub. He is also a writer for the Python Software Foundation and Oracle's AI and Data Science blog. Quan is currently pursuing a Ph.D. in Computer Science at Washington University in St. Louis. Alexander Joseph Sarver is an ambitious data scientist and content creator with 6 years of mathematical teaching experience. Marios Tsatsos has 8+ years of experience in research in Physics, analytical thinking, modeling, problem solving and decision making.