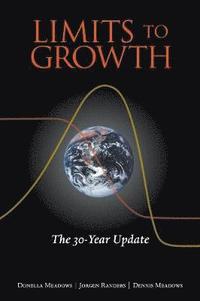 av Donella Meadows, Jorgen Randers, Dennis Meadows
(6 röster)  |  Läs 1 recension
Häftad Engelska, 2013-06-17
191
Köp
Spara som favorit
Skickas inom 5-8 vardagar.
Gratis frakt inom Sverige över 159 kr för privatpersoner.
Finns även som
Visa alla 1 format & utgåvor
In 1972, three scientists from MIT created a computer model that analyzed global resource consumption and production. Their results shocked the world and created stirring conversation about global 'overshoot,' or resource use beyond the carrying capacity of the planet. Now, preeminent environmental scientists Donnella Meadows, Jorgen Randers, and Dennis Meadows have teamed up again to update and expand their original findings in The Limits to Growth: The 30 Year Global Update. Meadows, Randers, and Meadows are international environmental leaders recognized for their groundbreaking research into early signs of wear on the planet. Citing climate change as the most tangible example of our current overshoot, the scientists now provide us with an updated scenario and a plan to reduce our needs to meet the carrying capacity of the planet. Over the past three decades, population growth and global warming have forged on with a striking semblance to the scenarios laid out by the World3 computer model in the original Limits to Growth. While Meadows, Randers, and Meadows do not make a practice of predicting future environmental degradation, they offer an analysis of present and future trends in resource use, and assess a variety of possible outcomes. In many ways, the message contained in Limits to Growth: The 30-Year Update is a warning. Overshoot cannot be sustained without collapse. But, as the authors are careful to point out, there is reason to believe that humanity can still reverse some of its damage to Earth if it takes appropriate measures to reduce inefficiency and waste. Written in refreshingly accessible prose, Limits to Growth: The 30-Year Update is a long anticipated revival of some of the original voices in the growing chorus of sustainability. Limits to Growth: The 30 Year Update is a work of stunning intelligence that will expose for humanity the hazy but critical line between human growth and human development.
Visa hela texten

John N. Cooper, for AxisofLogic.com- This is a wonderful book. Originally published in 1972 as Limits to Growth and refreshed in 1992 in Beyond the Limits, the authors have now issued a 30-year appraisal [Chelsea Green Publishing, ISBN 1-931498-58-X], in which they examine the progress made both in their understanding of the mechanisms underlying the impact of humanity on the world ecology and of steps taken toward remediating the accelerating approach to trainwreck that is mankind's ill-managed and uncontrolled 'footprint' on this planet's environment. Briefly, humanity has overshot the limits of what is physically and biologically sustainable. That overshoot WILL lead to the collapse of the planetary environment's ability to support not only our species but much of the rest of the biosphere if we do not act rapidly and effectively to reduce our footprint. These conclusions provide reasons for both optimism and alarm: optimism because humanity has demonstrated its capacity to act appropriately in one specific instance; and alarm because thirty years have been largely wasted since the consequences of our failing to act were detailed. There is still time but the need to act quickly and effectively is urgent. The authors demonstrate that the most critical areas needing immediate attention are: population; wasteful, inefficient growth; and pollution. They show how attention to all three simultaneously can result in returning the human footprint on the environment to manageable, sustainable size, while sharply reducing the disparity between human well-being and fostering a generous quality-of-life worldwide. Absent this, the prospects are grim indeed. The book is divided into three sections, the first outlining in principle the authors' systems analytical approach to understanding the planet's ecology. Their presentation is clear and comprehensible with an abundance of charts and figures that make visualizing the concepts easy. They successfully avoid the pitfalls of many technical presentations by using familiar analogies and largely avoiding professional jargon. As a result readers come away with insights not just into global interconnectedness of inputs, outputs, accumulation and feedback but also the significance of such dynamics in local, even personal, situations. The second section deals with the authors' updated and revised modeling program, World3, which they utilize to test the plausible effects of changes in human political, economic and social behavior on the environment. Their discussion of World3 focuses on the assumptions for, and results of, a variety calculational scenarios. Details of their latest programming revisions are reserved for an index. Repeatedly they emphasize that their results are NOT prescriptive, but merely descriptive in general terms of likely consequences of humanity's failure or success in rising to meet the issues cited. Again excellent graphics for the various scenarios allow the reader to see at a glance what different approaches toward rectifying past, present and future environmental damage may have. The final chapters describe options open to humanity that the authors believe have the best chance of avoiding social, economic and probably political collapse in the next century or so. We have a choice: the human experiment, possibly even the biological experiment, that is life on this planet can yet succeed and persist in a sustainable way. But to do so will require our species as whole consciously and deliberately to take immediate, remediating steps, now, seriously and adequately to address the issues we have so far failed to do so effectively. It IS up to us. (c) Copyright 2005 by AxisofLogic.com. -- John N. Cooper "In 1972, The Limits to Growth was published as a clarion call to begin changing the way the world worked so we safely made it to 2050-2070. The authors were clear that the path of change needed to begin "now" so we made a course correction within

A woman whose pioneering work in the 1970s still makes front-page news, Donella Meadows was a scientist, author, teacher, and farmer widely considered ahead of her time. She was one of the world's foremost systems analysts and lead author of the influential Limits to Growth--the 1972 book on global trends in population, economics, and the environment that was translated into 28 languages and became an international bestseller. That book launched a worldwide debate on the earth's capacity to withstand constant human development and expansion. Twenty years later, she and co-authors Dennis Meadows and Jorgen Randers reported on their follow-up study in Beyond the Limits and a final revision of their research, Limits to Growth: The 30-Year Update, was published in 2004. Jorgen Randers is professor of climate strategy at the BI Norwegian Business School, where he works on climate issues and scenario analysis. He was previously president of BI and deputy director general of WWF International (World Wildlife Fund) in Switzerland. He lectures internationally on sustainable development and especially climate, and is a nonexecutive member of a number of corporate boards. He sits on the sustainability councils of British Telecom in the UK and the Dow Chemical Company in the United States. In 2006 he chaired the cabinet-appointed Commission on Low Greenhouse Gas Emissions, which reported on how Norway can cut its climate gas emissions by two-thirds by 2050. Randers has written numerous books and scientific papers, and was coauthor of The Limits to Growth in 1972, Beyond the Limits in 1992, Limits to Growth: The 30-Year Update in 2004, and 2052: A Global Forecast for the Next Forty Years in 2011. Randers lives in Oslo, Norway. Dennis Meadows is emeritus professor of systems policy and social science research at the University of New Hampshire, where he was also director of the Institute for Policy and Social Science Research. In 2009 he received the Japan Prize for his contributions to world peace and sustainable development. He has authored ten books and numerous educational games, which have been translated into more than 15 languages for use around the world. He earned his Ph.D. in Management from MIT, where he previously served on the faculty, and has received four honorary doctorates for his contributions to environmental education.

1. Overshoot 2. The driving force: exponential growth 3. The limits: sources and sinks 4. World3: the dynamics of growth in a finite world 5. Back from beyond the limits: the ozone story 6. Technology, markets, and overshoot 7. Transitions to a sustainable system 8. Tools for the transition to sustainability