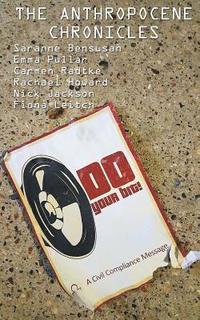 av Saranne Bensusan, Emma Pullar, Carmen Radtke, Rachael Howard, Nick Jackson
Häftad Engelska, 2018-05-31
149
Köp
Spara som favorit
Skickas inom 10-15 vardagar.
Gratis frakt inom Sverige över 159 kr för privatpersoner.
An Anthology of stories written by some of the best writers in the genre, both previously published and not, with tales that follow the lives of those living in a Dystopian society where the majority of the population reside in small apartments underground, while those higher up in society reap the benefits of their labour and Civil Compliance keep order.

The writers help you experience most of life as they take to work with with a lower-classed citizen, take you to the gym for a mandatory work-out, experience the one hour of recreation time within a heavily scheduled, and join a citizen on the run from a retirement facility.

Saranne is a film producer and director with a background in storytelling through film editing, She has worked on post production of over 16 film and TV titles. She established herself as a producer in 2014 and has produced 14 films. Saranne has also written seven short films and a feature film that have gone on to be produced. To date her work has won 11 awards, a further five nominations and has been screened at over 40 international film festivals. Her short film Mnage du Trois qualified for BAFTA Cymru, and was submitted in spring of 2018. Her work is usually the wacky, weird or out-there horror and she has dabbled in stop motion animation and practical special effects on film sets. Emma is a writer of dark fiction and children's books. Her picture book, Curly from Shirley, was a national bestseller and named best opening lines by NZ Post. Emma's horror story, London's Crawling, published in Dark Minds, was shortlisted for the SJV Award. Her horror story, WORMS, was a Twisted Vol2 winner and her sci-fi
304
story, Alterverse, was a Singularity50 winner. Emma's debut novel, Skeletal, was published by Bloodhound Books in autumn 2017. The sequel is out Summer 2018. Emma's second picture book Kitty Stuck, is a collaboration with her twelve-year-old daughter and out in June 2018, published by A Spark in the Sand. Carmen is a former newspaper reporter who has switched sides and now resides in Fictionland. Her debut novel The Case of the Missing Bride was a Malice Domestic finalist and is, like her second novel A Matter of Love and Death (this one written as Caron Albright) a historical mystery with a bit of romance. Her Sci-fi short story Safe House won a place in the upcoming Singularity50 anthology. Carmen also writes screenplays in different genres.

Love and Other Crimes, by Carmen Radtke 45

The Colour of Roses, by Nick Jackson 190