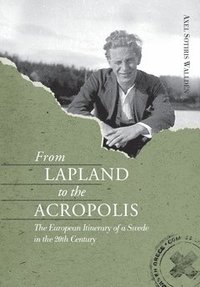 From Lapland to the Acropolis : the European itinerary of a Swede in the 20th century

av Axel Sotiris Walldén
Häftad Engelska, 2016-10-05
228
Köp
Spara som favorit
Skickas inom 7-10 vardagar.
Gratis frakt inom Sverige över 159 kr för privatpersoner.
This book is the story of Gottfrid Walldén, a Swede born at the beginning of the 20th century in Lapland, who arrived in Greece during the Second World War with the Swedish Red Cross mission. He later settled in Athens where he was to remain until his death in 1967. Gottfrid spent his early years moving from place to place within Sweden and in high school studies in northern France. He was posted to the Red Cross mission to Greece in 1942. His deployment coincided with the Axis occupation of Greece and the ensuing period of the Greek Civil War (1942-49). The relief work, to which he was committed as an official, contributed to alleviating the famine that cost hundreds of thousands of lives. From his writings and correspondence about his personal itinerary, his son, the author of this present work recreates the atmosphere pervading his successive experiences in Sweden, France and Greece in the first half of the 20th century.
Visa hela texten