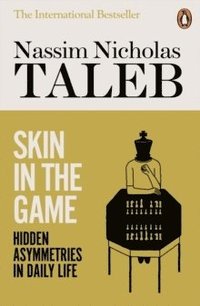 Skin in the Game

av Nassim Nicholas Taleb
Häftad Engelska, 2019-02-28
129
Köp
Spara som favorit
Skickas inom 5-8 vardagar.
Fri frakt inom Sverige över 159 kr för privatpersoner.
Finns även som
Visa alla 3 format & utgåvor
THE TOP TEN BESTSELLER From the bestselling author of The Black Swan, a bold book that challenges many of our long-held beliefs about risk and reward, politics and religion, finance and personal responsibility Why should we never listen to people who explain rather than do? Why do companies go bust? How is it that we have more slaves today than in Roman times? Why does imposing democracy on other countries never work? The answer: too many people running the world don't have skin in the game. In his inimitable, pugnacious style, Nassim Nicholas Taleb shows that skin in the game applies to all aspects of our lives. It's about having something to lose and taking a risk. Citizens, lab experimenters, artisans, political activists and hedge fund traders all have skin in the game. Policy wonks, corporate executives, theoreticians, bankers and most journalists don't. As Taleb says, "The symmetry of skin in the game is a simple rule that's necessary for fairness and justice, and the ultimate BS-buster," and "Never trust anyone who doesn't have skin in the game. Without it, fools and crooks will benefit, and their mistakes will never come back to haunt them".
Visa hela texten

The author of The Black Swan is back with a simple warning: don't buy what your neighbour is selling unless he owns some too. The obvious application for this is investing, but Taleb has a much broader domain. In a kind of philosophical Freakonomics, he takes us from 5th-century wandering monks (banned by the church because they were too free) to Donald Trump (his imperfections showed he had skin in the game) -- Rosamund Urwin * Sunday Times Books of the Year * As always with Taleb, this is a fascinating set of ideas. And he's right. People with skin in the game learn how the game works. Without it, they don't -- William Leith * Evening Standard * Nassim Nicholas Taleb is the Richard Wagner of uncertainty. While the Ring Cycle of the German composer/librettist portrayed the struggle of the gods in a series of operas, the Incerto series of books by the Lebanese-American author is devoted to humans -- specifically how we deal with the endemic risk in our all-too-finite existence -- Dominic Lawson * Sunday Times * The most prophetic voice of all . . . Taleb is a genuinely significant philosopher . . . someone who is able to change the way we view the structure of the world through the strength, originality and veracity of his ideas alone -- John Gray * GQ * A great iconoclast. . . Taleb, a Wall Street trader turned essayist, is a thinker touched by genius. . . The big picture he presents is powerfully argued and offers myriad policy implications -- Matthew Syed * The Times * A thinker for uncertain times. . . If you want to better understand populism, Trump, Brexit and the anti-establishment backlash then Taleb, of no party or clique, is your man -- Josh Glancy * Sunday Times *

Nassim Nicholas Taleb spent twenty-one years as a risk taker before becoming a researcher in philosophical, mathematical, and (mostly) practical problems with probability. Although he spends most of his time as a flaneur, meditating in cafes across the planet, he is currently Distinguished Professor at New York University's Tandon School of Engineering but self-funds his own research. His books, Antifragile, The Black Swan, The Bed of Procrustes and Fooled by Randomness (part of a multi-volume collection called Incerto, Latin for uncertainty), have been translated into thirty-seven languages. Taleb has authored more than fifty scholarly papers as backup to Incerto, ranging from international affairs and risk management to statistical physics. He refuses all awards and honours as they debase knowledge by turning it into competitive sports.