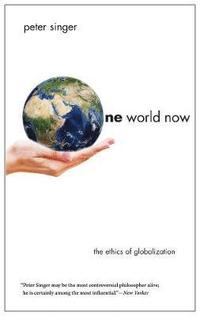 The Ethics of Globalization

av Peter Singer
Häftad Engelska, 2016-11-01
159
Köp
Spara som favorit
Skickas inom 7-10 vardagar.
Fri frakt inom Sverige över 159 kr för privatpersoner.
Finns även som
Visa alla 1 format & utgåvor
One World Now seamlessly integrates major developments of the past decade into Peter Singer's classic text on the ethics of globalization, One World. Singer, often described as the world's most influential philosopher, here addresses such essential concerns as climate change, economic globalization, foreign aid, human rights, immigration, and the responsibility to protect people from genocide and crimes against humanity, whatever country they may be in. Every issue is considered from an ethical perspective. This thoughtful and important study poses bold challenges to narrow nationalistic views and offers valuable alternatives to the state-centric approach that continues to dominate ethics and international theory. Singer argues powerfully that we cannot solve the world's problems at a national level, and shows how we should build on developments that are already transcending national differences. This is an instructive and necessary work that confronts head-on both the perils and the potentials inherent in globalization.
Visa hela texten

"This is a valuable update to a book that excels at examining competing solutions for some of the world's critical economic, environmental, and political problems."-David A. Rezvani, Dartmouth College "One World is an instructive book, especially for American students wrestling with America's poor record as a global citizen. However unpleasant this may be, awareness of the reality is a necessary condition for young people to want to get involved to change things for the better."-David Hoinski, West Virginia University "As someone who uses this book and some of its details for teaching, I greatly welcome the updated data and evidence. I am not aware of other books on this subject that are accessible to general readers."-Linda Dynan, Northern Kentucky University "Peter Singer writes, as always, lucidly and with relentless logic. Getting states to behave ethically is a heroic aspiration, but this book will give even the most obdurate realist much to think about."-Gareth Evans, Past President, International Crisis Group, former Australian Foreign Minister "Peter Singer may be the most controversial philosopher alive; he is certainly among the most influential."-New Yorker (on the earlier edition)

Peter Singer is professor of bioethics at Princeton University and laureate professor at the University of Melbourne.