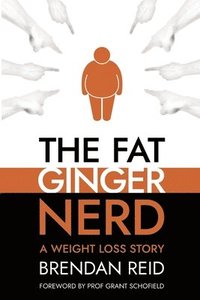 During the 1980s and 1990s, a time when the world was convinced that eating less and moving more was the simple solution to the burgeoning obesity epidemic, Brendan grew up having committed the cardinal sin of being fat.

Then in 2015, his health failing and with both time and options running out, one chance encounter set in motion a personal journey of discovery that would see him achieve and maintain a healthy weight for the first time in his life.

Now, with our metabolic health in a worse state than ever, Brendan reflects on his own weight loss transformation and speaks out against the continuing one-size-fits-all dietary dogma that had previously condemned him to decades of unnecessary suffering.

The Fat Ginger Nerd is an inspiring personal story with practical weight loss help and some startling insights into how we ended up with this public health crisis.
Visa hela texten

Brendan Reid is a former fat broadcaster turned fat software developer. He lives in Dunedin, New Zealand, now minus the fat. After finally losing more than 50kg (111 pounds) in under two years, Brendan's original weight loss success story was featured on Diet Doctor in 2017, and since 2019 he has spoken of his experience at live events both at home and overseas. Between his ongoing work and video game habits, his book The Fat Ginger Nerd took around five years to write, and around forty years to live.