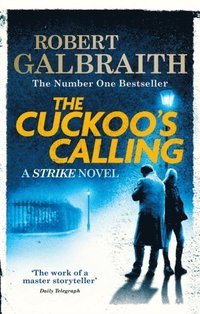 av Robert Galbraith
(8 röster)  |  Läs 2 recensioner
Häftad Engelska, 2014-02-13
119
Köp
Spara som favorit
Skickas inom 7-10 vardagar.
Fri frakt inom Sverige över 159 kr för privatpersoner.
Finns även som
Visa alla 1 format & utgåvor
'The Cuckoo's Calling reminds me why I fell in love with crime fiction in the first place' VAL MCDERMID ----- Now a major BBC drama: The Strike series When a troubled model falls to her death from a snow-covered Mayfair balcony, it is assumed that she has committed suicide. However, her brother has his doubts, and calls in private investigator Cormoran Strike to look into the case. Strike is a war veteran - wounded both physically and psychologically - and his life is in disarray. The case gives him a financial lifeline, but it comes at a personal cost: the more he delves into the young model's complex world, the darker things get - and the closer he gets to terrible danger . . . A gripping, elegant mystery steeped in the atmosphere of London - from the hushed streets of Mayfair to the backstreet pubs of the East End to the bustle of Soho - The Cuckoo's Calling is a remarkable book. Introducing Cormoran Strike, this is the acclaimed first crime novel by J.K. Rowling, writing under the pseudonym Robert Galbraith. *** The latest book in the thrilling Strike series, TROUBLED BLOOD, is out now! *** ----- PRAISE FOR THE STRIKE SERIES: 'One of the most unique and compelling detectives I've come across in years' MARK BILLINGHAM 'The work of a master storyteller' DAILY TELEGRAPH 'Unputdownable. . . Irresistible' SUNDAY TIMES 'Will keep you up all night' OBSERVER 'A thoroughly enjoyable classic' PETER JAMES, SUNDAY EXPRESS
Visa hela texten

Cracking detective novel * Observer * The novel is the work of a master storyteller * Daily Telegraph * The private eye novel is not dead. It was merely waiting for Robert Galbraith to give it a firm squeeze, goosing it back to bold, new life. Hardboiled crime fans are going to go cuckoo for this one. I haven't had this much fun with a detective novel in years * Duane Swierczynski, Shamus and Anthony Award-winning author * I wasn't disappointed. Whether she's writing about Dementors or detectives, Rowling is a pro * Daily Beast * It's terrific ... A brilliant achievement, mordantly funny and monumentally absorbing ... A masterful novel, the kind of big, noisy, busy, beautiful book in which it is so easy and so pleasurable to become enmeshed * Chicago Tribune * One of the great pleasures of The Cuckoo's Calling, as with most detective stories, is observing the gumshoe's Aha! moments, without being told what they are ... Money and general fabulousness does for The Cuckoo's Calling what magic did for Harry Potter, creating an extravagant, alien, fascinating world for its characters to explore ... The Cuckoo's Calling is fun * Slate Magazine * Cleverly plotted ... Rowling serves up a sushi platter of red herring, sprinkling clues along the way, before Strike draws a confession out of the killer in a climax straight out of Agatha Christie * Entertainment Weekly * Rowling switches genres seamlessly ... A gritty, absorbing tale * Ellen Shapiro, People * Rowling moves through the polished world of fashion designers and rock stars with the same aplomb as she did when writing about wizards and witches * Vogue * The master is back. In The Cuckoo's Calling, a detective novel that Rowling published under the pseudonym of Robert Galbraith, she returns to the strengths that made Harry Potter - the beautiful sense of pacing, the deep but illusionless love for her characters - without sacrificing the expanded range of The Casual Vacancy. In doing so, she's written one of the books of the year * Charles Finch, USA Today * Robert Galbraith has written a highly entertaining book ... Even better, he has introduced an appealing protagonist in Strike, who's sure to be the star of many sequels to come * New York Times * The work of a master storyteller . . . This is a sharply contemporary novel full of old-fashioned virtues * Telegraph * Beautifully written with a terrific plot ... It's a terrific read, gripping, original and funny ... Please, please give us more of Robert Galbraith and Cormoran Strike * Daily Express * A gripping, finely crafted and atmospheric mystery, and its charismatic hero, ex-solder-turned-private-eye Cormoran Strike, is a brilliant creation * Sunday Business Post * An accomplished piece that thoroughly deserves its retrospective success * Financial Times * Her crime debut beguilingly shows that she can renounce magic and yet be magical * Sunday Times * It's probably best, for the moment, to forget Robert Galbraith's real identity; this is a very good book in its own right * Independent * It should come as no surprise that her first foray into crime fiction is so accomplished . . . a brilliant depiction of London life . . . at heart it's an engrossing and well-crafted who-dunnit. Unsurprisingly excellent * Sunday Mirror * Rowling's descriptions of contemporary London are excellent * Mail on Sunday * The appeal of The Cuckoo's Calling doesn't depend at all on Rowling's prior status. All credit to her: she has created a really good series here. Strike will be back * Evening Standard * A sharply contemporary novel full of old-fashioned virtues . . . wonderfully fresh and funny. I hope this is the inauguration of a series that lasts long enough to make Harry Potter look like a flash in the pan * Jake Kerridge, The Daily Telegraph * Rowling is a formidable storyteller . . . the plot is tightly moulded and told * Mark Lawson, The Guardian * The most engaging British detective to emerge so far this year . . . An astonishingly mature

Robert Galbraith is a pseudonym for J.K. Rowling, bestselling author of the Harry Potter series and The Casual Vacancy. All four Strike novels, The Cuckoo's Calling, The Silkworm, Career of Evil and Lethal White, topped the national and international bestseller lists and the series has been adapted for television, produced by Bronte Film and Television.