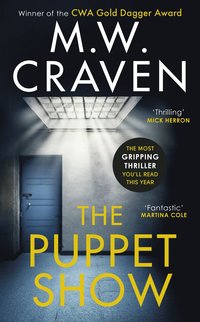 av M W Craven
Häftad Engelska, 2019-01-24
126
Köp
Spara som favorit
Finns även som
Visa alla 1 format & utgåvor
'Fantastic' Martina Cole 'Dark, sharp and compelling' Peter James 'A thrilling curtain raiser for what looks set to be a great new series' Mick Herron Welcome to the Puppet Show . . . A serial killer is burning people alive in the Lake District's prehistoric stone circles. He leaves no clues and the police are helpless. When his name is found carved into the charred remains of the third victim, disgraced detective Washington Poe is brought back from suspension and into an investigation he wants no part of. Reluctantly partnered with the brilliant, but socially awkward, civilian analyst, Tilly Bradshaw, the mismatched pair uncover a trail that only he is meant to see. The elusive killer has a plan and for some reason Poe is part of it. As the body count rises, Poe discovers he has far more invested in the case than he could have possibly imagined. And in a shocking finale that will shatter everything he's ever believed about himself, Poe will learn that there are things far worse than being burned alive ... 'A powerful thriller from an explosive new talent. Tightly plotted, and not for the faint hearted!' David Mark 'Satisfyingly twisty and clever and the flashes of humour work well to offer the reader respite from the thrill of the read.' Michael J. Malone 'Nothing you've ever read will prepare you for the utterly unique Washington Poe' Keith Nixon
Visa hela texten

M. W. Craven was born in Carlisle but grew up in Newcastle, returning after 31 years to take up a probation officer position in Whitehaven, eventually working his way up to chief officer grade. Sixteen years later he took the plunge, accepted redundancy and became a full-time author. He now has entirely different motivations for trying to get inside the minds of criminals. His first novel featuring Washington Poe and Tilly Bradshaw, The Puppet Show, was published by Constable to huge acclaim, and it has since won the CWA Gold Dagger Award and been shortlisted for the Amazon Publishing Readers' Awards: Best Crime Novel, the Goldsboro Glass Bell Award and the Dead Good Reader Awards. M. W. Craven lives in Carlisle with his wife, Joanne. When he isn't out with his springer spaniel, or talking nonsense in the pub, he can usually be found at punk gigs and writing festivals up and down the country.