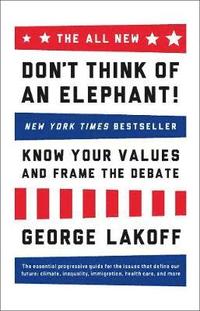 The ALL NEW Don't Think of an Elephant!

Know Your Values and Frame the Debate

av George Lakoff
Häftad Engelska, 2014-10-28
149
Köp
Spara som favorit
Lakoff researches how framing influences reasoning, or how the way we say something often matters much more than what we say. the Guardian Over a quarter of a million copies sold worldwide! Ten years after writing the definitive, international bestselling book on political debate and messaging, George Lakoff returns with new strategies about how to frame today's essential issues. Called the "father of framing" by The New York Times, Lakoff explains how framing is about ideas - ideas that come before policy, ideas that make sense of facts, ideas that are proactive not reactive, positive not negative, ideas that need to be communicated out loud every day in public. The revised edition picks up where the original book left off - delving deeper into how framing works, how framing has evolved in the past decade, how to speak to people who harbor elements of both progressive and conservative worldviews, how to counter propaganda and slogans, and more. The ALL NEW Don't Think of an Elephant! will make you reconsider everything you think you know about framing: Do you think facts alone can win a debate? Do you know what makes a Tea Party follower tick? Do you understand how to communicate on key issues that can improve people's lives? Whether you answer yes or no, the insights in The ALL NEW Don't Think of an Elephant! will not only surprise you, but also give you the tools you need to develop frames that work, and eradicate frames that backfire.
Visa hela texten

"Lakoff single-handedly convinced liberals of the importance of language in winning political battles. Now he's back to finish what he started."--Markos Moulitsas, founder and publisher, Daily Kos "The All New Don't Think of an Elephant! is an indispensable tool for progressives-packed with new thinking on framing issues that are hotly debated right now, and new insights on how to reclaim the political debate on meaningful terms that can yield true progress, not just political gains."--Jennifer M. Granholm, former governor of Michigan "When the original Don't Think of an Elephant! came out in2004, Lakoff showed us that progressive Democrats voted on values, not issues-just like the right. Now, Dr. Lakoff is back to prevent a relapse of bad framing. The ALL NEW Don't Think of an Elephant! is a must read, every bit as important as the first edition. This time we have to train ourselves to think for the long term. Buy this book, memorize it, and teach it to your children. Progressives may be smart, but we don't communicate our ideas well. This book is the blueprint for how to do better."--Howard Dean, former chair of the Democratic National Committee and founder of Democracy for America

George Lakoff is the country's leading expert on the framing of political discourse and one of the world's most renowned linguists and cognitive scientists. He is the author of numerous books on politics-including Don't Think of an Elephant!, The Political Mind, Moral Politics, Thinking Points, The Little Blue Book (with Elisabeth Wehling), and Whose Freedom?-as well as numerous books on language and the mind. Lakoff has consulted with the leaders of hundreds of advocacy groups on framing issues, lectured to large audiences across the country, run dozens of workshops for activists, spoken regularly on radio talk shows and TV shows, addressed the policy retreats and the caucuses for both the Senate and the House Democrats, consulted with progressive pollsters and advertising agencies, and been interviewed at length in the public media, and he continues to do extensive research on the framing of public discourse. Currently Distinguished Professor of Cognitive Science and Linguistics at the University of California at Berkeley, Lakoff is a founder of the fields of cognitive science and cognitive linguistics, has previously taught at Harvard and the University of Michigan, and was a fellow at the Center for Advanced Study in the Behavioral Sciences at Stanford. For more than two decades, he was codirector of the Neural Theory of Language Project at the International Computer Science Institute at Berkeley. He also spent more than a decade as senior fellow at the Rockridge Institute, a nonpartisan think tank, and has served on the international advisory board of Prime Minister Zapatero of Spain, on the science board of the Santa Fe Institute, as president of the International Cognitive Linguistics Association, and on the governing board of the Cognitive Science Society. He has lectured at major universities in dozens of countries around the world. His current technical research is on the theory of how the neural circuitry of the brain gives rise to thought and language. His blogs appear regularly on his website, www.georgelakoff.com, and at The Huffington Post, Truthout, Alternet, Common Dreams, and Daily Kos.