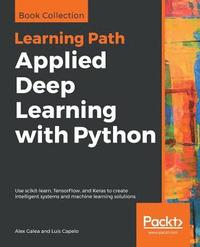 Use scikit-learn, TensorFlow, and Keras to create intelligent systems and machine learning solutions

av Alex Galea, Luis Capelo
Häftad Engelska, 2018-08-31
559
Köp
Spara som favorit
Finns även som
Visa alla 1 format & utgåvor
A hands-on guide to deep learning that's filled with intuitive explanations and engaging practical examples Key Features Designed to iteratively develop the skills of Python users who don't have a data science background Covers the key foundational concepts you'll need to know when building deep learning systems Full of step-by-step exercises and activities to help build the skills that you need for the real-world Book DescriptionTaking an approach that uses the latest developments in the Python ecosystem, you'll first be guided through the Jupyter ecosystem, key visualization libraries and powerful data sanitization techniques before we train our first predictive model. We'll explore a variety of approaches to classification like support vector networks, random decision forests and k-nearest neighbours to build out your understanding before we move into more complex territory. It's okay if these terms seem overwhelming; we'll show you how to put them to work. We'll build upon our classification coverage by taking a quick look at ethical web scraping and interactive visualizations to help you professionally gather and present your analysis. It's after this that we start building out our keystone deep learning application, one that aims to predict the future price of Bitcoin based on historical public data. By guiding you through a trained neural network, we'll explore common deep learning network architectures (convolutional, recurrent, generative adversarial) and branch out into deep reinforcement learning before we dive into model optimization and evaluation. We'll do all of this whilst working on a production-ready web application that combines Tensorflow and Keras to produce a meaningful user-friendly result, leaving you with all the skills you need to tackle and develop your own real-world deep learning projects confidently and effectively. What you will learn Discover how you can assemble and clean your very own datasets Develop a tailored machine learning classification strategy Build, train and enhance your own models to solve unique problems Work with production-ready frameworks like Tensorflow and Keras Explain how neural networks operate in clear and simple terms Understand how to deploy your predictions to the web Who this book is forIf you're a Python programmer stepping into the world of data science, this is the ideal way to get started.
Visa hela texten

Alex Galea has been professionally practicing data analytics since graduating with a master's degree in Physics from the University of Guelph, Canada. He developed a keen interest in Python while researching quantum gases as part of his graduate studies. Alex is currently doing web data analytics, where Python continues to play a key role in his work. He is a frequent blogger about data-centric projects that involve Python and Jupyter Notebooks. Luis Capelo is a Harvard-trained analyst and a programmer, who specializes in designing and developing data science products. He is based in New York City, America. Luis is the head of the Data Products team at Forbes, where they investigate new techniques for optimizing article performance and create clever bots that help them distribute their content. He worked for the United Nations as part of the Humanitarian Data Exchange team (founders of the Center for Humanitarian Data). Later on, he led a team of scientists at the Flowminder Foundation, developing models for assisting the humanitarian community. Luis is a native of Havana, Cuba, and the founder and owner of a small consultancy firm dedicated to supporting the nascent Cuban private sector.