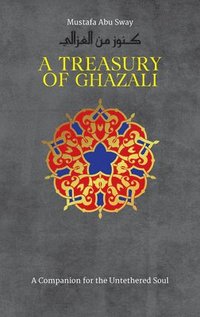 A Treasury of Ghazali

A Companion for the Untethered Soul

av Abu Hamid Al-Ghazali, Mustafa Abu Sway
Inbunden Engelska, 2017-09-19
130
Köp
Spara som favorit
Abu Hamid al-Ghazali (d. 505/1111) has been described by some scholars as the greatest Muslim in Islamic history. His prolific works, written over the duration of his relatively short lifetime, have deeply influenced Islamic thought for nearly a thousand years. Al-Ghazali was a polymath who had mastered every discipline known to the scholars of his time. In many ways, his corpus of writings on law, theology, philosophy, and Islamic spirituality, represent the most influential understanding of the Islamic religion ever articulated. This short volume, written by one of the world's leading experts on al-Ghazali, comprises forty gems from al-Ghazali's inexhaustible treasury of writings, that give the modern reader insights into both the richness of al-Ghazali's thought, and how they can better help us understand Islam today.
Visa hela texten

"This wonderful volume is a most welcome edition ... Each of these nuggets of wisdom is ably explained and aesthetically produced."-Muhammad Hozien, Ghazali.org

Mustapha Abu Sway is the first holder of the Integral Chair for the Study of Imam Ghazali's Work at the Aqsa Mosque and at Al-Quds University in Jerusalem, Palestine. He has been Professor of Philosophy and Islamic Studies at the university since 1996. In addition to numerous academic appointments at Asian and American universities, at the Aqsa Mosque, he teaches al-Ghazali's greatest work, the Revival of the Religious Sciences, dedicated to reviving the spiritual disciplines that lie at the heart of Islam. Al-Ghazali (450/1058-505/1111), was born at Tus, near Mashhad in Iran, in the early Seljuq era and studied theology and law at Nishapur. His formidable intellectual abilities soon won him honour and respect at the court of the famous Seljuqi Prime Minister, Nizam al-Mulk, and, while still in his early thirties, he became Professor at Madrasa Nizamiyya in Baghdad and attained great prominence there. But soon he abandoned his professorship for a decade of contemplation and study. He returned for a while to lecture at the Nizamiyya in Nishapur before his death. He wrote a large number of works, which include "Al-Munqidh min al-Dalal" (a biographical account), "Tahafut al-Falasifa"; but his magnum opus remains the "Ihya' Ulum al-Din" in four volumes, compiled during his period of retirement and contemplation.

INTRODUCTION | 1 Education with the Right Intention; 2 Are You in the Wrong Business?; 3 Seek Felicity; 4 Introspection; 5 Do Your Good Deeds Outnumber Your Bad Ones?; 6 The Greatest Pleasure of All; 7 Deconstructing Greek Metaphysics; 8 Do not Eat Your Path to Heaven; 9 The Merits of Marriage; 10 Striving Beyond Justice; 11 Degrees of Piety; 12 The Fruit of Divine Love; 13 Travelling; 14 Listening to Songs; 15 Enjoining Good and Forbidding Evil; 16 Behaviour is the Mirror of the Heart; 17 Flames of Repentance; 18 Patience Against Sin; 19 True Grace; 20 A Plantation for the Hereafter; 21 Shamefully Busy; 22 Sins as True Veils; 23 Occasionalism (Allah is the Cause of all Events); 24 Love is the Renewed Imperative; 25 On Knowledge, 26 Action and Sincerity; 27 There Are Absolutely No Secrets; 28 Thinking and Having a Preference for the Eternal; 29 Remembering Death; Knowledge vs. Gold and Silver; 30 Presenting Faith to Children; 31 External Cleansing and Internal Purification; 32 Deconstructing Distractions; 33 Fasting Has Three Degrees; 34 Liberation from Attachments; 35 Involvement of the Tongue, Intellect and Heart in Reciting the Holy Qur'an; 36 Knowing Allah Is a Matter of the Heart; 37 Inculcating Beautiful Personal Traits; 38 Excessive Appetite for Food Unleashes Destructive Forces; 39 Healing the Love for Status; 40 Revolting Against Powerful Unjust Rulers | REFERENCES | INDEX