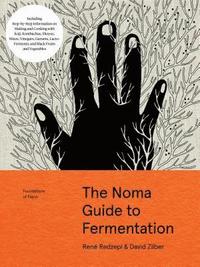 The Noma Guide to Fermentation (Foundations of Flavor)

Including Step-By-Step Information on Making and Cooking with: Koji, Kombuchas, Shoyus, Misos

av Rene Redzepi, David Zilber
(4 röster)
Inbunden Engelska, 2018-10-16
369
Köp
Spara som favorit
Kan tyvärr inte levereras innan julafton.
At noma - four times named the world's best restaurant - every dish includes some form of fermentation, whether it's a bright hit of vinegar, a deeply savory miso, an electrifying drop of garum, or the sweet intensity of black garlic. Fermentation is one of the foundations behind noma's extraordinary flavour profiles. Now Rene Redzepi, chef and co-owner of noma, and David Zilber, the chef who runs the restaurant's acclaimed fermentation lab, share never-before-revealed techniques to creating noma's extensive pantry of ferments. And they do so with a book conceived specifically to share their knowledge and techniques with home cooks. With more than 750 full-colour photographs, most of them step-by-step how-tos, and with every recipe approachably written and meticulously tested, Foundations of Flavor: The Noma Guide to Fermentation takes readers far beyond the typical kimchi and sauerkraut to include koji, kombuchas, shoyus, misos, lacto-ferments, vinegars, garums, and black fruits and vegetables. And - perhaps even more important - it shows how to use these game-changing pantry ingredients in 100 original recipes. Fermentation is already building as the most significant new direction in food (and health). With Foundations of Flavor: The Noma Guide to Fermentation, it's about to be taken to a whole new level.
Visa hela texten

"A significant [marker of] culinary culture. . . . A fresh set of transformative cooking fundamentals . . . [that] make ferments something cooks reach for as readily as salt." -The New York Times "An indispensable manual for home cooks and pro chefs." -Wired "[A] window into the magic . . . of what is arguably the most famous restaurant in the world." -Food Wine "The Noma Guide to Fermentation is the scientifically geekiest, the most modern and the most radical [of fermentation guides]. It's also one of the most illuminating. I'm someone who has all manner of Ball jars and mothers bubbling under her kitchen sink, but this book helped me to finally understand the processes involved. . . . Each recipe is accompanied by ideas for what to actually do with the stuff, bending the mind further to open new food pathways." -The New York Times Book Review "This book on fermentation is the master class." -Eater, The Best Cookbooks of Fall 2018 "Poised to become an essential tome in professional and home kitchens." -San Francisco Chronicle "The Noma Guide to Fermentation is really something special. . . . It's a great beginner's overview and it's also creative and artistic, and I really recommend checking it out." -The Splendid Table "Refreshingly accessible." -Grub Street, The Best New Fall Cookbooks "A stunningly detailed guide to fermentation, offering home cooks and curious eaters an unprecedented glimpse into the fascinating mechanics of the centuries-old technique, with recipes. The Noma Guide to Fermentation is a landmark work that makes the biochemical process newly accessible, and, dare we say it, fun." -FoodandWine.com "What the book makes clear is that [Redzepi's] secret isn't fermentation, it is the ways in which he's elevated it to a fine art. . . . Penned with the lightness, humor and journalistic acumen of a Michael Pollan tome." -Modern Farmer "Approachable recipes that home cooks can use to add nuance to their cooking." -Fine Cooking "A wildly practical and fascinating examination of one of the world's oldest methods of food preservation." -Publishers Weekly, starred review "An edible chemistry experiment. . . . Fascinating reading for armchair cooks - or a novel challenge for intrepid culinary adventurers." -Christian Science Monitor "Something for the true food nerd (and I mean that in the most complimentary way). . . . The recipes are fascinatingly inventive, and the processes behind those recipes are written in a style that makes a novice like me feel like he could give it a go." -FieldandStream.com "Without question, you need this book. Even if you already have a basic understanding about lacto-fermenting; fermenting kombucha, vinegar, and working with koji; and making your own vinegars, this volume is a treasure trove of inspiration. . . . Beyond the fermentations themselves, Redzepi and Zilber share clever ideas for using each ingredient, such as a blended fermented blueberry paste to smear on fresh corn [and] a coffee kombucha soaked into ladyfingers for tiramisu. . . . Indispensable." -Plate, The Best Fall 2018 Cookbooks "A new way to create the building blocks of great dishes that will really set your cooking apart." -Robb Report, The 6 Cookbooks You'll Want to Add to Your Shelf This Fall "[Redzepi's] influence on the food world is unparalleled. . . . Once dubbed the 'Locavore Hero' for popularizing the local food movement and foraged foods, Redzepi now believes that the future of Noma as well as the food industry is clearly fermented. . . .The Noma Guide to Fermentation aims to promote the creative new flavor profiles yielded by fermentation as well as propel the idea that fermentation can actually make cooking easier. . . . [It's] the home cook's new favorite food hack." -Forbes.com "Perfect

Rene Redzepi is the chef and co-owner of noma in Copenhagen, four times recognised as the world's best by the World's 50 Best Restaurants. Redzepi has twice appeared on the cover of Time magazine (and been named one of Time's 100 Most Influential People in the World); been featured in publications from the New York Times to Wired; and been profiled in two feature-length documentaries and countless national and international media outlets. His first book, Noma: Time and Place in Nordic Cuisine, an IACP and James Beard Award winner, has over 150,000 copies in print. He is also the author of A Work in Progress. He lives with his wife, Nadine Levy Redzepi, and their three children. Find him on Instagram @reneredzepinoma and @nomacph. David Zilberis a chef and photographer who hails from Toronto, Canada. He has cooked from coast to coast across North America, most notably as a sous-chef at Hawksworth Restaurant in Vancouver. He has worked at noma since 2014 and has served as director of its fermentation lab since 2016. He enjoys Jamaican patties and quantum physics. Find him on Instagram @david_zilber.