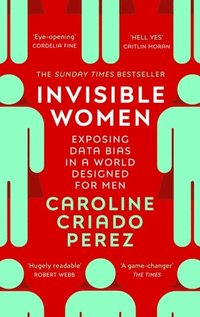 Exposing Data Bias in a World Designed for Men

av Caroline Criado Perez
Häftad Engelska, 2020-03-05
129
Köp
Spara som favorit
Skickas inom 7-10 vardagar.
Fri frakt inom Sverige över 159 kr för privatpersoner.
Finns även som
Visa alla 3 format & utgåvor
*THE SUNDAY TIMES BESTSELLER* 'HELL YES. This is one of those books that has the potential to change things - a monumental piece of research' Caitlin Moran Imagine a world where... * Your phone is too big for your hand * Your doctor prescribes a drug that is wrong for your body * In a car accident you are 47% more likely to be injured. If any of that sounds familiar, chances are you're a woman. From government policy and medical research, to technology, workplaces, and the media. Invisible Women reveals how in a world built for and by men we are systematically ignoring half of the population, often with disastrous consequences. Caroline Criado Perez brings together for the first time an impressive range of case studies, stories and new research from across the world that illustrate the hidden ways in which women are forgotten, and the profound impact this has on us all. Discover the shocking gender bias that affects our everyday lives. 'A book that changes the way you see the world' Sunday Times 'Revelatory, frightening, hopeful' Jeanette Winterson **Winner of the Royal Society Insight Investment Science Book Prize 2019** **Winner of the Readers' Choice Books Are My Bag Award 2019** **Winner of the FT & McKinsey Business Book of the Year 2019 Book of the Year Award 2019** **The Times Current Affairs Book of the Year 2019**
Visa hela texten

Invisible Women takes on the neglected topic of what we don't know - and why. The result is a powerful, important and eye-opening analysis of the gender politics of knowledge and ignorance. With examples from technology to natural disasters, this is an original and timely reminder of why we need women in the leadership of the institutions that shape every aspect of our lives. -- Cordelia Fine This book is a devastating indictment of institutionalised complacency and a rallying cry to fight back... Invisible Women should propel women into action. It should also be compulsory reading for men -- Christina Patterson * Sunday Times * Revelatory, frightening, hopeful. A secular Bible -- Jeanette Winterson HELL YES. This is one of those books that has the potential to change things - a monumental piece of research -- Caitlin Moran Revelatory - it should be required reading for policy and decision makers everywhere -- Nicola Sturgeon

Caroline Criado Perez is a writer, broadcaster and award-winning feminist campaigner. Her most notable campaigns have included co-founding The Women's Room, getting a woman on Bank of England banknotes, forcing Twitter to revise its procedures for dealing with abuse and successfully campaigning for a statue of suffragist Millicent Fawcett to be erected in Parliament Square. She was the 2013 recipient of the Liberty Human Rights Campaigner of the Year Award, and was awarded an OBE in the Queen's Birthday Honours 2015. Her first book, Do it Like a Woman, was published in 2015. She lives in London.